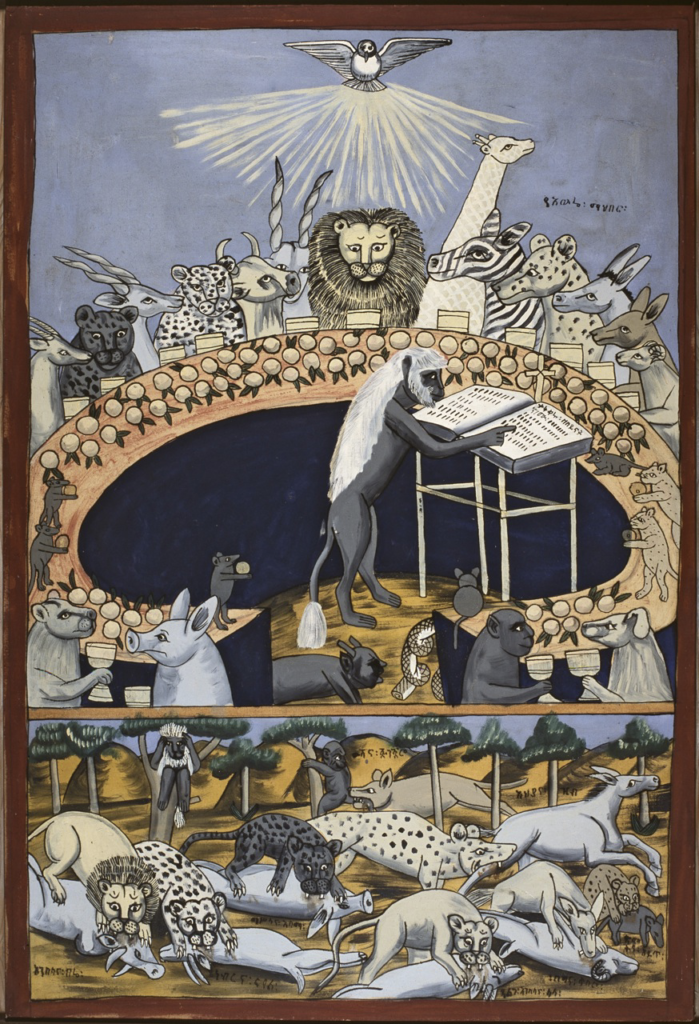 Anonymous, Assembly of the Animals, ca. 1965–1975 Oil on linen Courtesy the Tropenmuseum, Amsterdam

Anselm Franke: Public Lecture: Below That Scheme: Decolonization and Art

What does it mean to revise and decolonize (art) history? In this talk, I will be speaking about how and why “art” and especially “art history” has been historically divorced from larger cosmological questions, and what function the  – thus modernised –  arts have fulfilled within racial capitalism and its division of labour. I’ll be discussing a particular painting by a non-identified Ethiopian painter that is divided into two halves, the upper half showing a harmonious society, depicted as peaceful gathering of animals, and the lower half depicting scenes of violence. This painting – with a focus on the line that separates the two halves in particular – , shall serve as a navigational tool in a quest to understand capitalism not just as a system, but as a cosmology, divestment and exit from which is a matter of survival.

Anselm Franke is a curator and writer. He is Head of the Department of Visual Arts and Film at HKW Berlin, where he co-curated the multi-year program “The Anthropocene Project” (2013-2014) and “Kanon-Fragen (2016-2019), and conceived numerous exhibitions such as recently “Neolithic Childhood. Art in a False Present ca. 1930” (together with Tom Holert) and “Parapolitics. Cultural Freedom and the Cold War” (with Paz Guevara, Nida Ghouse and Antonia Majaca). Publications include “2 or 3 Tigers” (2017, with Hyunjin Kim), “Forensis” (2015, with Eyal Weizman et. al.) and “Animism” (2010). Franke received his doctorate from Goldsmiths College, London.